Call for a Free SEO Consultation:
(877) 736-1112
This entry was posted in SEO on by Seo Tuners.
TwitterFacebookLinkedIn

On November 7th Google shook things up in the SEO world. There is substantial evidence that an unannounced update is underway. This update has been affecting websites across a wide range of industries.

Most reports have come from webmasters in the USA who run affiliate sites and have observed changes in the travel, food, and health sectors. SEO experts have described the update as “aggressive” and comparisons have been made in terms of size and scope to the ranking changes that occurred following the first Penguin Update in 2012.

Google has commented on the speculation of a November update via Twitter. They confirmed that several updates were made to the Google Search algorithm during this period and will change regularly. The only way that businesses can attend to this new update is to create outstanding content.

Google also states that it is not specific niches or industries that are affected by updates, but certain types of search query that are answered differently. However, there is likely considerable overlap here and there’s not always a clear distinction between the two.

In the past, some SEOs promoted the idea that Google was targeting medical sites. They were wrong but the “Medic Update” name has stayed to remind the SEO industry that Google does not target specific industries. This update has affected publishers from all niches and affects a wide range of site topics.

Each year, Google makes hundreds of changes to search. In 2018, they reported an incredible 3,234 updates — an average of almost 9 per day, and more than 8 times the number of updates in 2009. While most of these changes are minor, Google occasionally rolls out a major algorithmic update (such as Panda and Penguin) that affects search results in significant ways. Here are the biggest Google updates we saw this year: What SEOs and Webmasters Think

Many of the reported traffic drops are in excess of 30 percent! Here are a selection of viewpoints and tweets from the community: 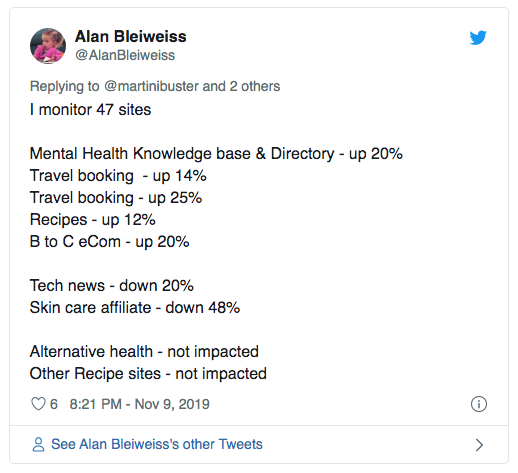 How to React to Google’s November Update

Google’s recommendation for webmasters and SEO’s whose websites have been affected by a Google Update is as follows: “We suggest focusing on ensuring you’re offering the best content you can.” When auditing a website, Google suggests considering questions regarding the following four aspects:

A good place for webmasters to start is to try and answer these questions as honestly as possible – and compare their website alongside their competition, with a particular focus on the quality of the content they are offering.

SeoTuners can offer an affordable solution for your business to increase exposure and SERP rankings with organic SEO strategies like keywords. we’re confident we have a solution for all your marketing needs. Contact us today to learn about how we can boost your Google rankings.